The Poetry Slam In Lakeside Park

I've been dying to go to one of these, only - as always - work gets in the way.

Anyways, Tuesday night and I'm free as a bird.

I haven't been to a poetry reading since Café La Gare in Edmonton. These I enjoyed greatly, watching people bringing in their retinues of admirers, cheerleader, one of note, a local older wealthy businessman/politician, who always showed up with a crowd of attractive lady boosters to read from his deep and only slightly concealed plagiarized verse, this trick, it worked well with his disciples but the larger audience gets into a debate as to "Plagiarism" vs "Homage", TS Eliot's line about
"Tedious arguments of insidious intent" has been borrowed - was it intended as a reference to the poem, or was he hoping we wouldn't notice?

This is before the days of internet, when catching plagiarists involved having read the actual poem. And - other than his retinue, everyone here has read the poem - it's English 101.

SO, looking forward to something with the same ambiance, atmosphere, and here I am. The weather, for the middle of June, positively miserable, in an open pagoda in Lakeside Park, grey, maybe 9 or 10 degrees and a biting wind from down-lake. I'm shivering the whole thing through, but if the others - most as poorly dressed as myself - can bear it, than so can I.

There's a procession of people with drums setting up about 30 yards from our Pagoda, it looks like a drum circle, there will be an accompaniment.

People come and go, most seem to be veterans, know one another. There's a table filled with young 20-30 somethings, another with a couple of families, men in their late 40's, a few others.

The Hostess announces the rules - a 3 minute time limit, gets the sign up sheet, solicits judges (In 3 Categories; Presentation, Content, Originality); I decline, I know, I'm the worst. If I judged everyone else half as harshly as I judge myself I'd be damned.

There are 9 Poets signed up and it begins. We're competing with a drum circle that's set up nearby, the drumming, sometimes an annoyance, sometimes a good accompaniment, the poets all have names like "Quanta" and "Rain" and "Shadow", a surprising number of girls (really? Maybe not...).

Many of the poets have brought girlfriends, boyfriends, family boosters or cheerleaders.

Reading from typed or handwritten pages, from colored index cards, from their phones, voices tremulous, trembling, A quiver that solicits sympathy, they're putting themselves out there, way out there, the host(ess)es  are the only ones with any composure, both having done this a few times, and an older man with his family reading sports styled poems, in the vein of "Mighty Casey", he's obviously done this a lot, the 80 year old hostess snapping her fingers to indicate support, miming basketball shots, she's into him...

A man with an actual basketball, "Quanta" is his name, is reading poems about ecological destruction and love, stands aloof from the rest of the audience until it's his turn to be called - trying to hard to be enigmatic, aloof, he bounced his basketball into the pagoda as if he "just happened onto" the slam and happened as well to have a poem or two in his pocket. His is a rapper style, against the world, too many rhymes, like "Aesop Rock" None-shall-pass but without the music and the emphasis of the additional rhymes, unnecessary, already been done.

A girl, young, describing her ideal relationship, boyfriend, in rhyming verse, aa-bb-cc or "I'd meet him in a place...I'd see our love in his face...we'd go for long walks and kiss...and when I was away I'd always miss..."

Next up a Valley girl in search of a meaningful connection, a described night out that fails with her lover and again with her boyfriend.

Another girl has a rapper style rant against the the patriarchy. The next one hates environmental destruction and wants to protect the Old Growth Forest. The next wants love-love-love. And yet another laments the old family values.

A note on the girls here, they all look like raccoons, dark eyes, from lack of sleep or drugs or crying or maybe both. Ages, now that everyone has more-or-less assembled - from a teenage judge with the sports-reader family to 80 years old, perhaps 30 people all told, most in their twenties/thirties, a few in their forties, and a handful in their 70's and 80's.

At the end of it all, a full couple hours later, brief intermission punctuated by freestyle readings (prose, whatever, generally random), scoring, the lowest score perhaps a 7.5, the highest a unanimous 10, to be kind if I were judging, honestly, the highest would have been a 7.5 but that's the point of the boosters, to skew the scores upwards. It's one of those things where the scores put a value on your friendships, nothing else. There are "prizes" for 3rd, 2nd, 1st Place. Modest prizes, like keychains, because - after all, it's poetry...

There were a couple in the middle that prove surprising literate. And most of them have some sense of rhyme or rhythm or turn of the phrase. There were people struggling with great ideas and failing badly and people mastering trivial ones. But maybe it's the cold and probably it's just me but it does suggest that while many, most even, can ape the idea, the rhyme and reason of it, few can climb any pinnacle of greatness, this poetry, it's a game for mugs...

Next Slam, July, if I have the night off I'll have to partake.

The Art of A. Moder

Dozens of boxes, quite literally hundreds of paintings. Done largely with a palette knife, oils on board - they'd been in storage for years, boxes filled with rat-droppings, dead spiders and cobwebs. 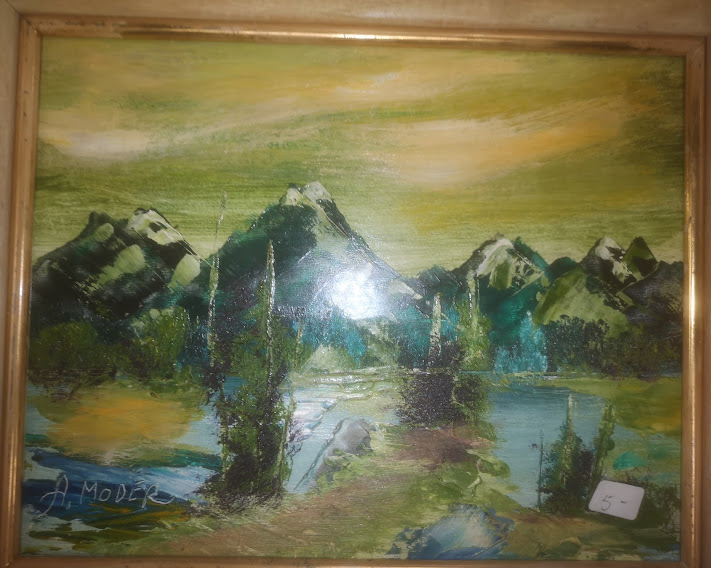 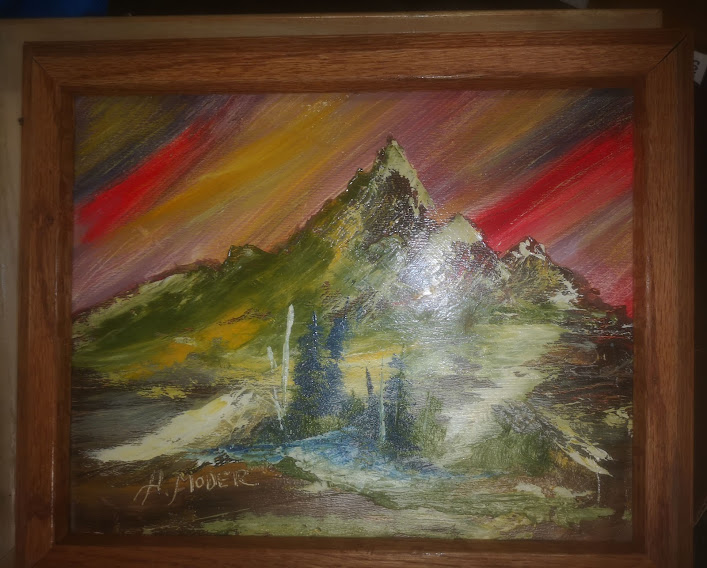 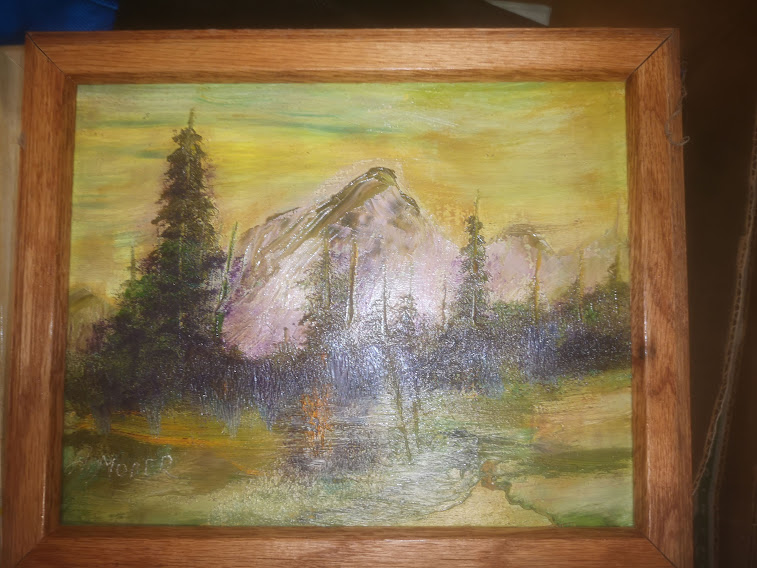 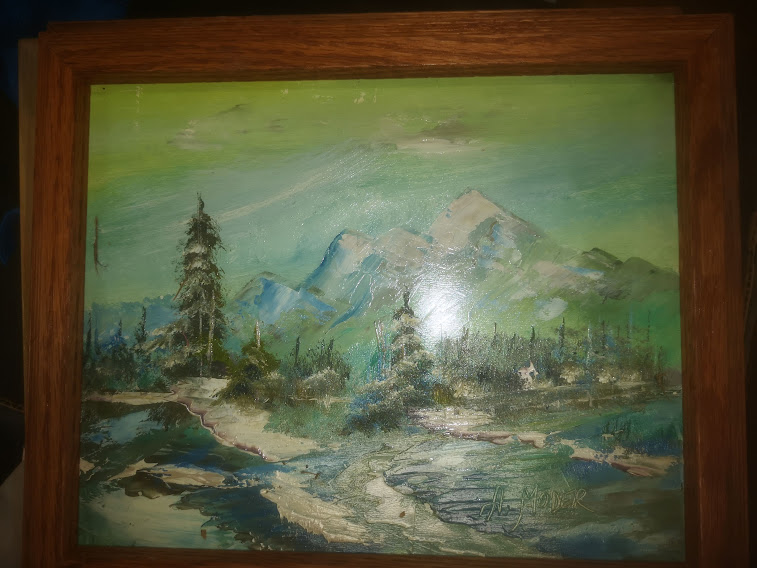 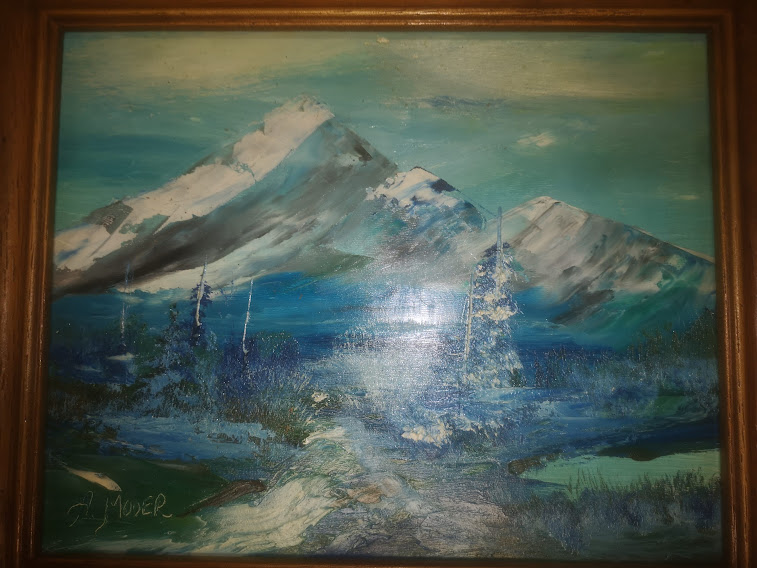 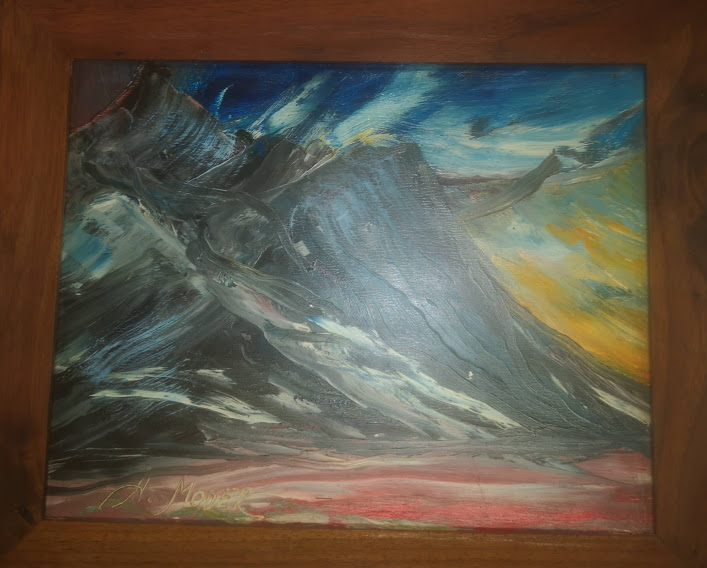 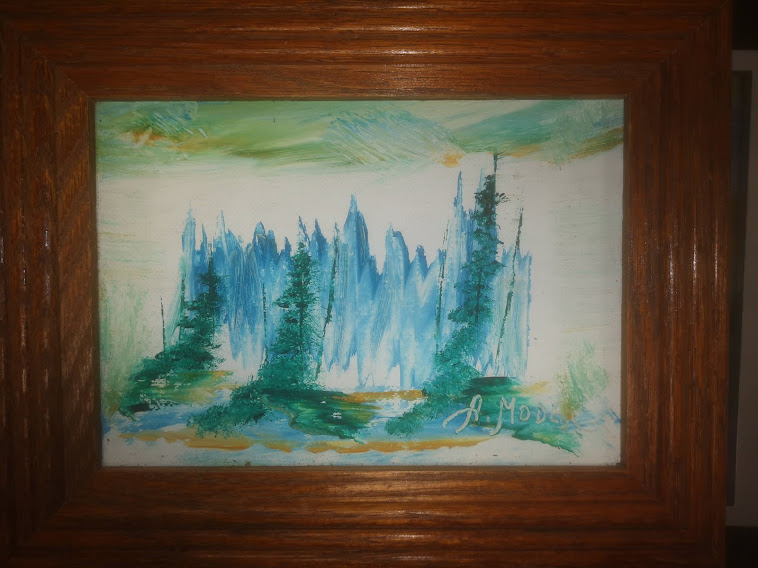 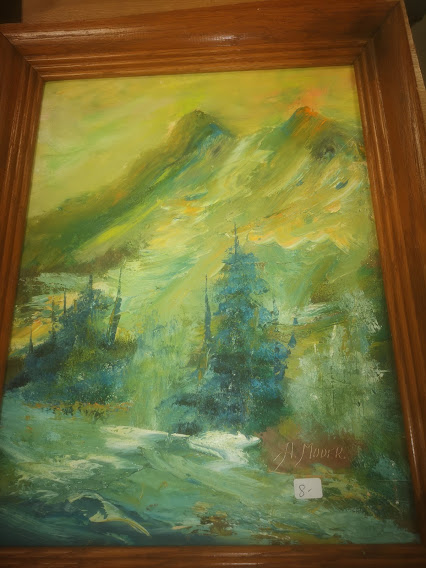 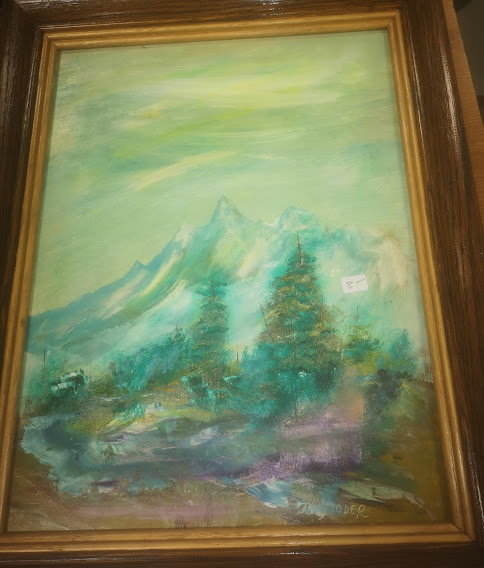 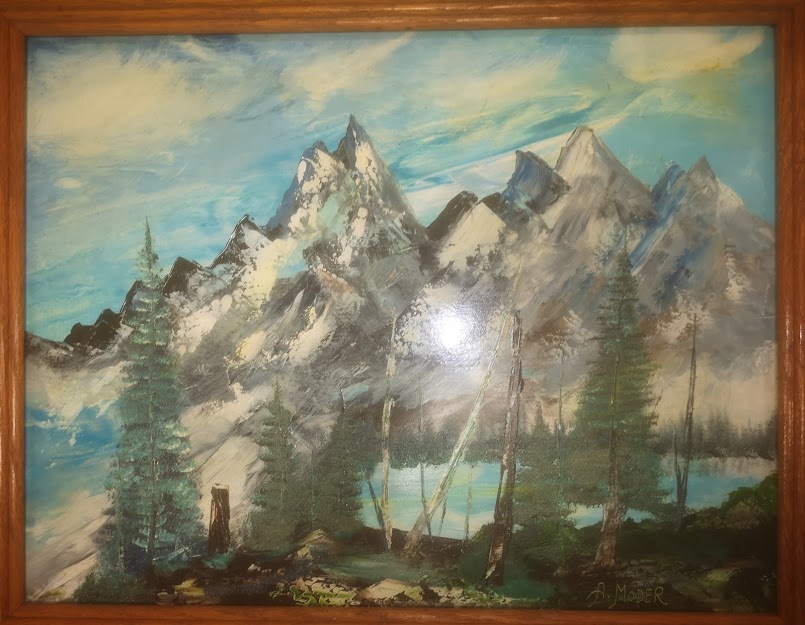 Saw this when I was a young kid at the movie theatre in Moose Jaw. Thinking it was the smaller double theatre off Main Street, the short before the feature, for some reason it disturbed me. Searched for it on the internet a few years ago, couldn't find it, now just turned it up.

and a half-dozen other things that have piqued my interest...

And there's a pile of other films I'm kinda dying to see as well. Like "The Man who Killed Don Quixote" by Terry Gilliam, who's bad films tend to beat most directors best films. I suspect there will be more here than has met most reviewers eyes. And there's "The HappyTime Murders", which reminds me of "Meet the Feebles", Peter Jackson's twisted take on the Muppets, and there are a few books, "Infinite Jest", By David Foster Wallace, and "The Unbitten Elbow", by Sigizmund Krzhizhanovsky, which will be a little tougher to find, and anything by Gerald Murnane, as I've read some reviews and am a little bit curious...

This will catch me up, there's a dozen books still to read on my shelf, a dozen movies downloaded onto a defunct computer which I may never get to see, but maybe I just gotta breeze on and try something new...

Just a brief explanation of how I review films. Ratings, if and when given, are completely arbitrary. A 2 banana 1 coconut peach movie is not necessarily better/worse/or as good as a movie I give 10/10 stars to. But I probably won't use the star system here at all. You may not know any of the movies here, if so, try a few, you might like them. Or perhaps you have seen a few, and disagree as to my recommendation. That's OK too - we're all different, I might not be the reviewer for you. That said, when these were seen, and many have been watched more than once, they made an impression.

Like you, my tastes are diverse, I liked "Fight Club", "V for Vendetta", "American Beauty" for their themes of social revolt. Perhaps I'll review them here. But to start I'll probably review by director, and list those films by each you must see. That is, if you're a film snob like me.

There is an advantage to the film-review-by-independant blogger format.

1). I'm completely unimpressed by celebrity and haven't been bribed by any of the big studios with vacation packages, meet-the-stars weekends, or any of the other goodies that tend to bias reviewers. The movies I list below are great for the reasons I list, and worth watching for the same reason.

2). Have you ever been to RottenTomatoes and trusted their reviews, only to find that you disagreed entirely with the rating? Here's why. The tomatoe-meter (I can't believe I'm using their Jargon") is an average of all reviews, but on a pass - or - fail basis only. SO, if 100 reviewers see a movie, and say that it's "just OK", the movie will look terrific on the tomatoe-meter and score 100%. This is a small failing of their system. Everyone agrees it's mildly entertaining, and so it recieves an overall rave review. In fact you're far better off to find a reviewer whose tastes, judgement and sympathies run parallel your own - you'll have a much better time at the movies. I might not be that person for you, but try a few of the recommendations before you make up your mind. You might be surprised.

Anyways, if you're still here, the list begins below. Today it's short, but in time it will grow.