Took one of the locals out for her 77th Birthday. Working up an appetite before the restaurant: 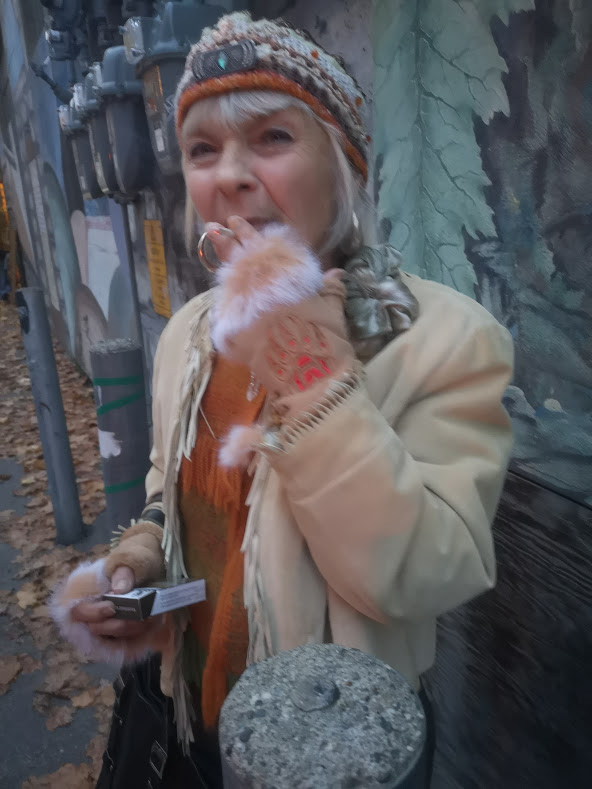 Posing for the Camera: 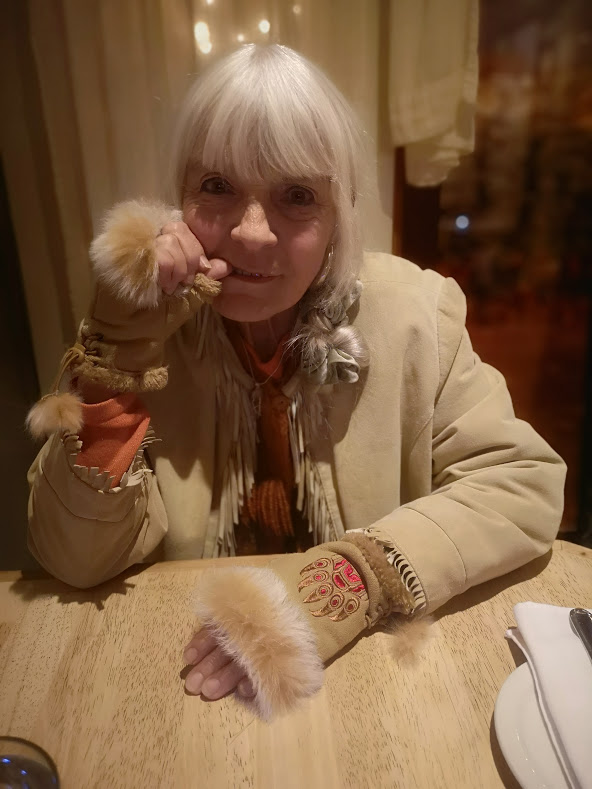 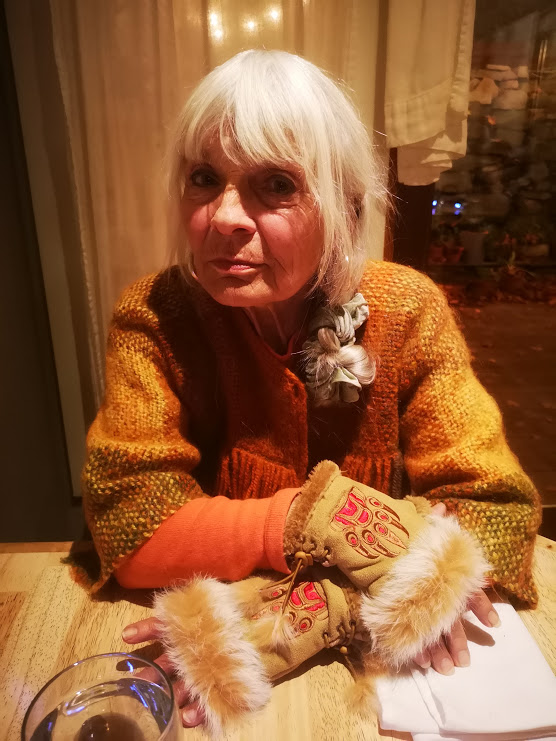 Like Stormy, starting conversations with the neighboring tables, an older, conservative couple, she's talking about greying hair with the woman, gets her age - a mere 76, then pooh-pooh's her as a youngling. Definitely more interesting people out here than in the city, 30 years a local, first arrived here and lived for a year in a TeePee in the Valley.

Days off, up the Crystal mountain, collecting, then out with Chris.

Guy from work, took him on a few prospecting excursions, showed him what was what, he's dying to go on a few more...

I don't blame him. I was at his place, the clusters he dug out of the Crystal mountain, I knew they were there, had made 4 trips up the mountain, snow ended every trip, the fifth trip I bring him along and we find it..

So, like, I don't wanna speak but my largesse, my generosity, it's costing my sanity dear. "Our" claim, but, really, mine, and not that I don't mind sharing but...you get it.

Now I'm trying to limit my time out with him, take him and show him some fluorite seams, show him how pretty it is under a black light, next thing he's got a few buckets at his place, pictures of it posted on Facebook.

And, every time I'm at his place I marvel at the size of the clusters he got from that pocket, easy $500-1000 apiece.

Take him up to explore some old abandoned mines, deep inside, his flash going off and ruining my photos. His photos, again, the next day on Facebook.

When we're off and not finding stuff - which is 99.9% of the job, he gets bored, wants to give up, go elsewhere.

Meanwhile, a couple of photos inside a mine, fungi growing off of guano: 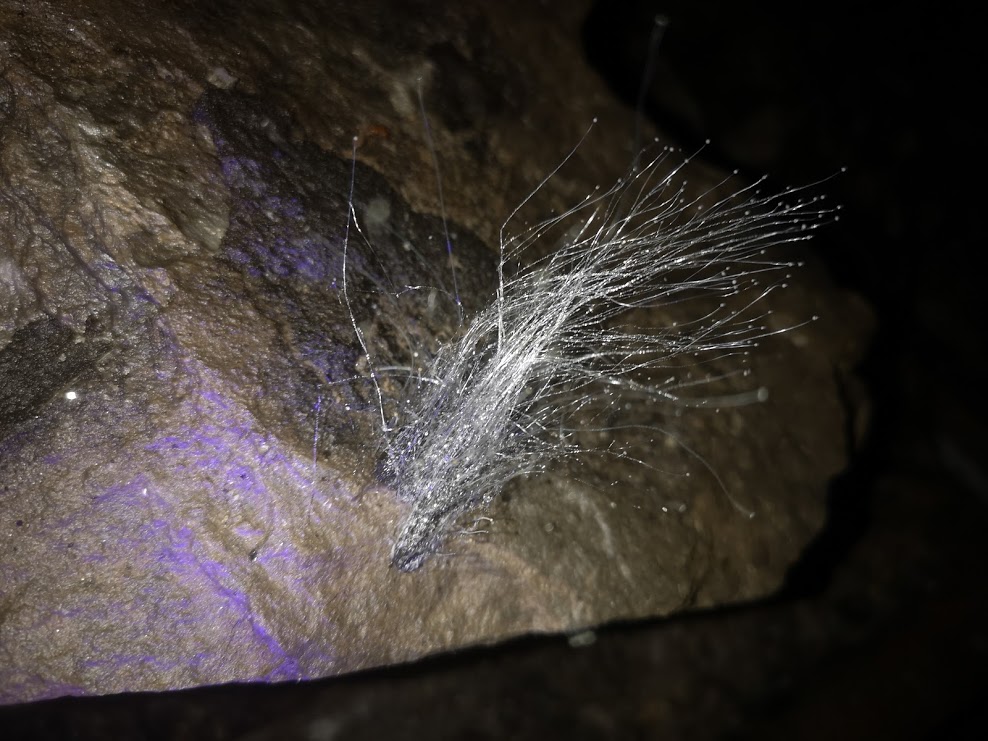 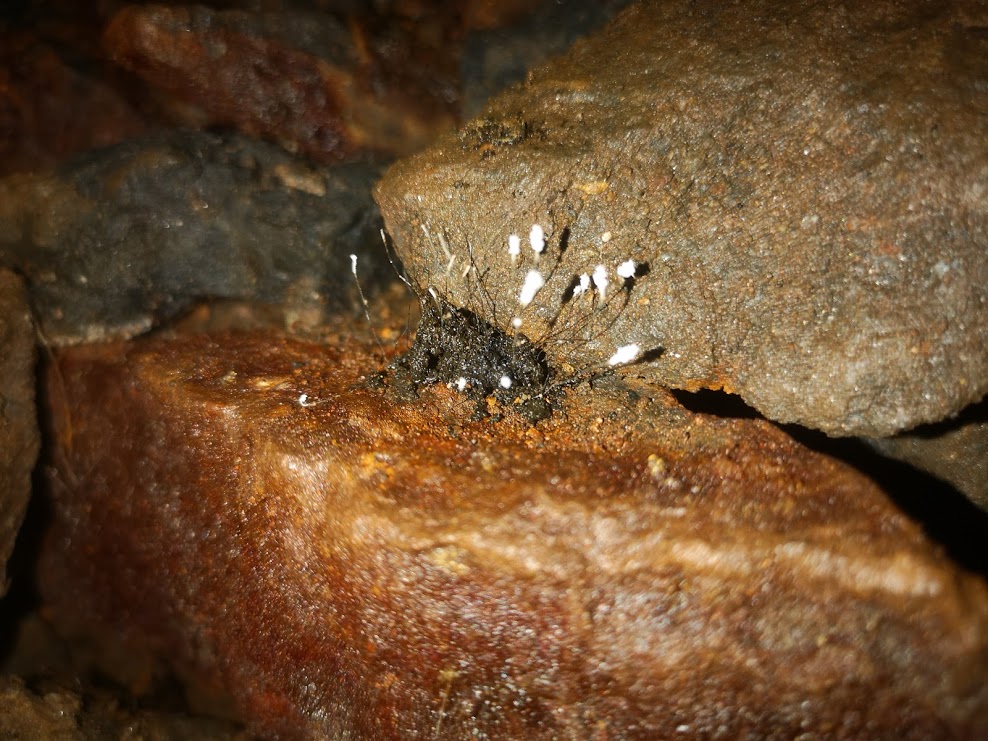 Bullshit. A bunch of expired listings, landlords who run their ads (same as last year, word for word) as a sort of perverted show-and-tell, never getting back to you, my predictions of abundant listings following the pandemic entirely wrong. 100%. Listings have dropped to a third - 22 or less, from a high of 90+ over the summer, and most ads are just people advertising they need an apartment or room to stay in over the winter. Landlords - few. Landlords that respond, fewer. Today, 10 hours - full - on hold for a potential landlady that has a suite to rent but has to take just "one more call" before she can speak to me.

Calgary was no great show either, but this is crazy. Nonetheless, I need a place to live.

The interview, she wants to talk, can I work?, can I maybe run an air-bnb?, can I fix roofs?, paint?, mow lawns?, shovel snow?, do I want it furnished and how much extra am I willing to pay...?

If I don't find a place soon - possible, even probable, I'm packing up the jeep and moving to Nova Scotia. Or somewhere, not here, this - until I've made my fortune, is insane. And what makes it worse - like in 3/4 of BC - is that a full 2/3 of the properties here - more, even - are vacant all winter, vacation properties held by out-of-towners.

We need to eat the rich, if only to make room for the locals.

This is, of course and we're all assured - a bad thing, and frankly I take a dim view of people that do it because it causes an increase in my rates.

On the other hand, why should we be forced to have insurance at all? I mean, it's obvious, if you think about it - it's to prevent us from incurring a debt or liability (eg: house fire on a mortgage, car accident that's our fault...etc) that we can't pay. The insurer then assumes the risk and adjusts the premium based on how risky they think we are.

But then, poke a little closer and you'll see some disturbing things. Like how come we have to pay insurance on every vehicle we own? Technically, I can only be driving one car at a time (despite having two hands). This is a nice piece of legislation that seems a tax on the rich. Or - if I have the assets to pay any liability I might incur, why should I have insurance?

Or, consider my case, but I think you can generalize to yourself - never a claim, in almost 40 years, wouldn't insurance then work better - for me, for us, if it was done like a life-insurance premium where we could at the end of our term withdraw (with compounded interest) our contributions?

The more you look at it, the more you realize that insurance is just a scam legislated into law by those interest groups with a share in insurance companies...