It's about time. 6 years now of house-sitting, roommates, basement suites in the farthest-flung suburbs, time now to find a place of my own.

In part precipitated by a roommate who lived in his own house of death, and the realization that I had scourged myself enough, that this was not a place to move creatively forward, or build relationships, or bring a child, and so at his encouragement I begin to look for a place to live. A place of my own.

When last I rented an apartment - 10 years ago - a 2 bedroom in Sunalta cost me around $700. a month. I know I'm not going to get anything in that price range, but I give it a try. Nope. And so I gradually increase my searches until I'm in the $1100, $1200 range. Rentfaster is the site, I make a few calls, send out emails, if your willing to pay the rent it shouldn't be a problem.

The first person I get hold of is Dean, small apartment in a walkup in lower Mt. Royal, he yells at me over the phone:

-"I'm enquiring about the apartment you had listed for rent..."

And he hangs up.

I call him back in an hour, "WHAT DO YOU WANT!" he screams again, louder, I mention the apartment, "IT'S RENTED!" he shouts, click, end of call. Scratch that one off the list.

Next a character suite above shops in Inglewood, laminate floors, view over 9th avenue, combination shower and urinal, no bath. I can't do, even at the relatively bargain priced $1000 per month.

Another call, this to a landlord in Bridgeland, she's friendly enough over the phone, asks me where i work, what I do, then asks me if I smoke. "Not indoors" I assure her, she begins to holler down the phone: "I SAID NO SMOKERS! DIDN'T YOU READ THE AD? I SAID DEFINITELY NO SMOKERS! NO SMOKERS!!!!" I attempt to explain that I don't smoke indoors, but she's not hearing it, hangs up.

Things are starting to look a little tougher...

A 300 square foot basement in Kensington, $800 a month, the landlady asks if I smoke, I explain, again, not on the property, not indoors, still the damage is done and the applications is formally thrown into the garbage as soon as I leave.

A lot of these places advertise as "Mature buildings, no one under 18", that doesn't help me, I have a daughter. And they discriminate against smokers, even if you don't smoke on the property. I've heard all the landlord stories, nightmare tenants, but it's beginning to seem there are a lot of nightmare landlords out there as well.

I've pretty much contacted everyone on rent faster, many simply didn't return calls or emails, from here I begin to check a few of the property management sites, one has a couple, I make appointments. A 60 year old landlady, 3 story walkup, Lower Mt. Royal off 17th Ave, she's hooked to oxygen in her apartment, standing at the door and telling me where to find the room, it takes a while, she gives me directions and that chats me up for a bit, soap operas playing on the TV, standing at her door, it takes me a few minutes before I realize that she's going a bit beyond the standard landlord spiel, she's chatting me up, awkward. The apartment is OK, and she assures me she can take the tubes off at any time, they just help...

Next apartment, Bankview. It's a keeper, immediately vacant, but I'll have to fill in forms, front my deposit, it's urgent, now, as all my belongings are in the car, heaps of clothes, junk, and I want immediate occupancy, but Ill have to wait, it's Tuesday before finally I can move in...

Now begins the process of finding the rudiments I'll need to survive, chairs, kitchen table, forage in the locker for those objects of inspiration and necessity, but - finally - 6 years on, a place of my own. And not a bad view, if I say so myself...

And while not exactly treasure, this is interesting; a girl feeds crows, the crows, in return, bring her the treasures they find in the neighborhood.

The concept of reciprocity with wild animals. We all know this with cats (the dead mouse, bird, on the doorstep, in the bed), but all in all I prefer the tastes of crows....

UPDATE: And this, related: http://www.hbmpodcast.com/podcast/hbm038-do-crows-mourn-their-dead

A beautiful dancing brunette, full figured, a Chai symbol blazing, burning upon her breast (or perhaps a He, or Heth, or Taw), I know she's Jewish, she's stunning...

The dance is short lived, she steps into a pile of gravel in the children's playground and sinks beneath it with her partner - male, I haven't seen him, but I know he's there...

These dunes of gravel on the playground, I know they're filled with the dead, waiting to reach up and pull us under, and so I wait upon the edge to warn my children and family, I find this terrifying, I know they're all beneath the dunes and waiting...

Man walks into Phoenix thrift shop looking for golf clubs, finds instead a LeCoultre Deep Sea Alarm for $5.99 and sells it for $35,000 on E-bay. As well he finds an original Omega Chronograph, which it sounds like he's keeping... 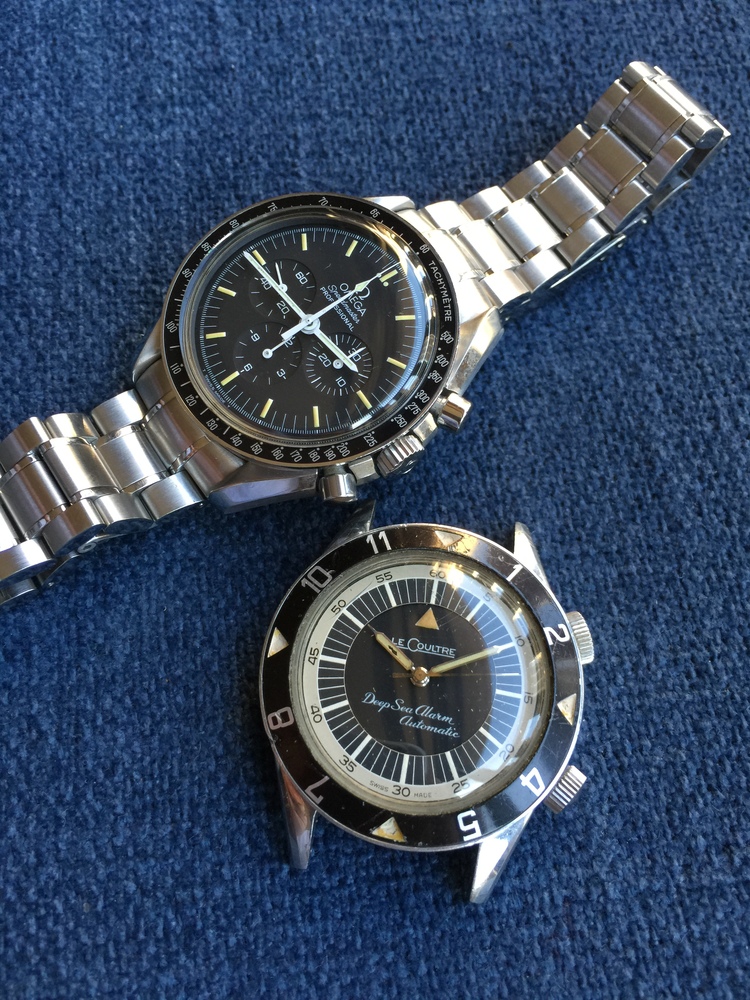