Somewhere along the line I clicked on this and, having done so once have been continually fed posts from this subreddit.

OP posts a photo, asking "what is this bug", it's been found on their body, sofa, clothes, in their bed, on the carpet...

You already know. 99/100 it's a bedbug. Bad news and everyone gives condolences and advice as to how to best fumigate the place.

Sometimes it's a spider or cute weevil or creepy centipede, but - otherwise, it's always a bedbug.

So, this time OP posts a video of a tiny little bug dancing in the palm of (presuming 'her' from avatar and username) hand, asking "What is this bug? Found a couple of them on me..."

And this time it's a crab louse.

Hilarity in the comments ensues.

It doesn't help that Crab Lice are considered a species on the verge of becoming endangered...

Suggestions range from declaring OP's bush a "Protected Area" to ... well, sound strategies for removal, provided it's not breaking any laws.

Anyways, funniest thread I've read in a while...

Last night's list of questions for the Chat GPT bot...

What cultures have no spiritual beliefs? (I should have asked "Which")

There are several cultures that have been identified as having no spiritual beliefs, including some forms of Buddhism, certain branches of humanism and secularism, and certain strains of philosophical naturalism. Additionally, some people within certain cultures may identify as atheist or agnostic and therefore do not subscribe to any spiritual beliefs. However, it's important to note that the absence of spiritual belief does not necessarily mean the absence of cultural practices or traditions.

What are the best arguments against the Big Bang Theory?

There are several arguments that have been made against the Big Bang Theory, including:

The horizon problem: This argument states that the universe should not be homogeneous on large scales if it expanded from a single point, as the different regions would not have had time to come into thermal equilibrium.

The flatness problem: This argument states that the density of matter in the universe is fine-tuned to an extraordinary degree in order for the universe to be flat, which is difficult to explain within the framework of the Big Bang Theory.

Alternative models such as steady state, cyclic models and other have been proposed to explain the evolution of the universe without a Big Bang.

It is important to note that these arguments do not necessarily disprove the Big Bang Theory, as scientists continue to research and develop new explanations and evidence to support the theory.

In the absence of extreme heat or pressure - how would someone go about creating a crystal. Eg. Diamond, fluorite, emerald, sapphire?

There are several methods for creating crystals in the absence of extreme heat or pressure, including:

Vapor Growth: Crystals can also be grown from a vapor by heating a material to a high temperature and allowing it to cool and deposit on a substrate. The atoms or molecules will bond together to form a crystal.

Melt Growth: Crystals can also be grown from a melt by heating a material to its melting point and allowing it to cool slowly. As the melt solidifies, the atoms or molecules will bond together to form a crystal.

Physical Vapor Transport: is a method of growing single crystals by means of a chemical transport process. Here, a material is heated and evaporated and then transported to a cooler location on a substrate where it recrystallizes.

The specific method used to create a particular crystal, such as a diamond, fluorite, emerald, or sapphire, will depend on the chemical and physical properties of the material. Some of them like diamond, sapphire and emerald are naturally occurring and may be mined, while others like Fluorite are synthesized in laboratory.

Are there factors other than heat, pressure and cooling time that might affect crystal growth, such as magnetism, electricity, atmosphere?

Yes, there are other factors that can affect crystal growth in addition to heat, pressure, and cooling time, such as:

Magnetic fields: Crystals can be grown in the presence of a magnetic field, which can affect the alignment of the atoms or molecules as they bond together to form the crystal.

Electric fields: Electric fields can also affect the alignment of atoms or molecules as they bond together to form a crystal, and can also be used to manipulate the growth of crystals.

Temperature and Pressure Gradients: Temperature and pressure gradients can also affect crystal growth. For example, different parts of the crystal may grow at different rates if the temperature or pressure varies within the growth environment.

Agitation: Agitation of the growth solution or melt can also affect crystal growth, by promoting nucleation and growth of crystals.

All of these factors can have an effect on the final properties and quality of the crystal, such as its size, shape, color, and optical properties.

In the absence of heat or pressure, what would you suggest to be the ideal solution and method to growing diamonds?

Growing diamonds in the absence of heat or pressure is a complex process, but one method that has been developed is chemical vapor deposition (CVD). CVD is a process where diamond is grown by introducing a mixture of gases, such as methane and hydrogen, into a reactor. The gases are then excited by a plasma or a hot filament, and the carbon atoms will deposit on a substrate, where they bond together to form diamond.

This method allows to grow diamond films and small diamond crystals in a controlled and repeatable manner. To achieve the growth, it is important to have a substrate that is a good crystal seed and provides an appropriate surface for diamond nucleation and growth. Additionally, the growth temperature and pressure, the composition of the gas mixture and the growth time must be carefully controlled to ensure the quality and properties of the diamonds.

It is important to note that this method is still in the research stage and the diamonds produced are not suitable for jewelry but are used for scientific, industrial and electronic applications.

Can you provide a list of the most intriguing or compelling fictional characters in novels and plays?

There are many fictional characters in novels and plays that are considered intriguing or compelling. Here is a list of just a few examples:

Holden Caulfield from J.D. Salinger's "The Catcher in the Rye"

Holden Caulfield from J.D. Salinger's "The Catcher in the Rye"

Scout Finch from Harper Lee's "To Kill a Mockingbird"

This is not an exhaustive list, and there are many other fictional characters that could be considered intriguing or compelling depending on the reader's perspective. These characters are chosen due to their complexity and the way they are portrayed throughout the story, they are not only memorable but also have a psychological depth that makes them relatable and human-like.

***Note: Holden Cualfield appears twice. I know all of the characters, less "Okonkwo". But googling him I should read this. I'm noticing a large bias towards Western Culture. That said, I'm not happy with this list, and will need to refine the question and ask it again, to answer my own tastes...

What are the most influential spiritual volumes/texts current in the world today?

There are many spiritual texts that have had a significant impact on the world today. Here is a list of some of the most influential:

The Bible: The Bible is considered the most influential spiritual text in the world, and is the foundation of the Christian religion.

Bhagavad Gita: The Bhagavad Gita is a sacred Hindu text and is considered one of the most important texts in Indian philosophy and religion.

The Dhammapada: The Dhammapada is a collection of sayings attributed to the Buddha and is considered one of the most important texts in Buddhism.

The Yoga Sutras of Patanjali: This ancient text is considered the foundation of Raja Yoga, one of the six traditional branches of yoga and is highly revered in Hinduism and Buddhism.

These are just a few examples of the many spiritual texts that have had a significant impact on the world today. Each one of them has shaped the beliefs and practices of the different religious groups around the world, and they continue to be studied, revered and followed by millions of people.

I've got a lot of questions to ask, and I should get them done before they start charging for this service...That said, anyone notice how quickly Google has started to up their game in the past week or so? It's like they've just realized there's a new kid on the block... 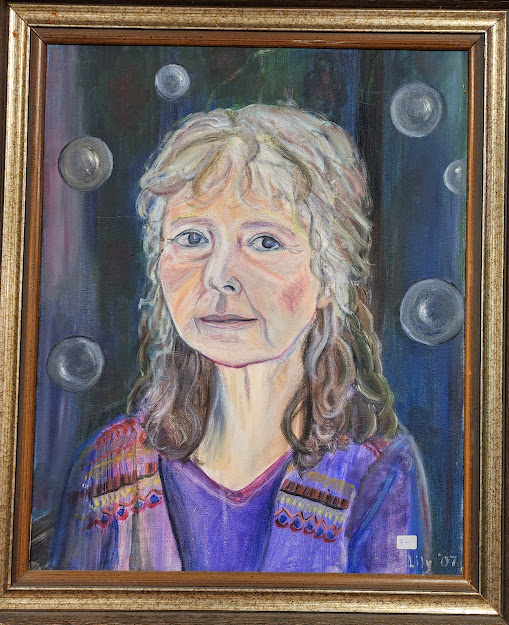 Vaguely recognizable, but .... kinda reminds me of the woman from "Ozark". Yeah, not my cup of tea... 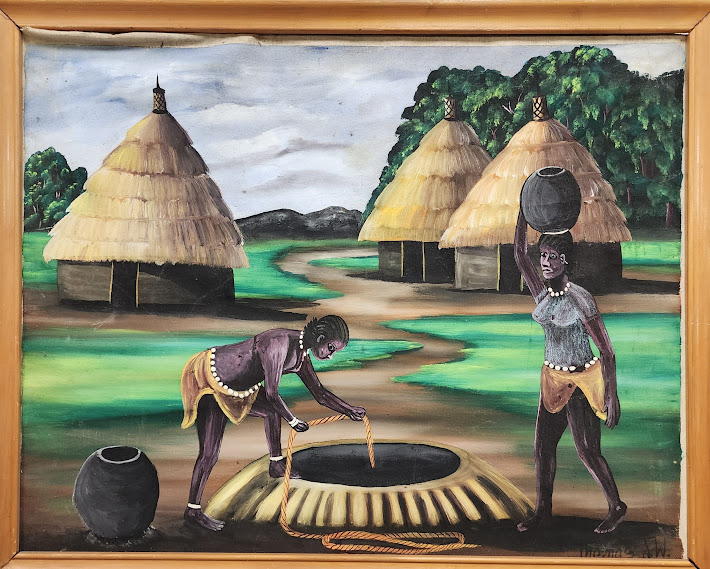 And this one just reeks of "Thought I'd set up my bible and tell all the villagers about Jesus when they came to get water...."

After Paul Gauguin? Probably not. Just bad art in the missionary style.

And, with all my theosophy and woo-woo listening on YouTube he was bound to come up.

This is good. There is, for some reason, an increasing abundance of his lectures and books being made available online.

On the downside, they're largely old-timey recordings of seminars and lectures that he's given.

His voice, shrill, there's the underlying static, hiss of audio, he's a pedant, and not in a bad way. You have to respect his immense learning and accomplishments. He's wise, curious, and - more important - he has the answers, and where he doesn't he doesn't pretend.

He is, for the last century as well as our own, an Occidental master.

The lectures that I've listened to so far; on integrity, or why we should change ourselves and not our leaders (when we've changed ourselves we can better become our leaders - leadership is but a deflection for our own bad behavior), on "Secret Powers, and why we should not use them" - and here, here he has good answers. This is the Bible retold, but with an explanation - that to open these doors and go down these roads oft leads to forks and paths of no return, and that - while there are many things we do not know (and he's referring to mediumship, telepathy, false gurus) we have guides at our disposal that DO work and should not need to resort to them...and perhaps - most curious, a learned thing for me - that the oldest, the most ancient of all prayers - regardless of culture/religion/ - were to offer praise and gratitude to God/Gods/Deities/Spirits. There were no petitions, no intercessions, no - none of it.

There was simply the expression of thanks for the divine privilege of being.

Now, I've been down so many of these rabbit holes that I'm going to be forced to back-track and see who he contradicts, if any (and - probably not; these views are debauched Catholicism, Christianity. He's right without question, and intuitively we are of the same mind, not that mine is as great, merely that it's been informed by his and agrees, I can find no argument...), that every action or thought - no matter how trivial, should be considered in light of it's consequences upon others.